Does Mold Cause Chronic Fatigue Syndrome?

What Is The Link Between Mold and Chronic Fatigue Syndrome? 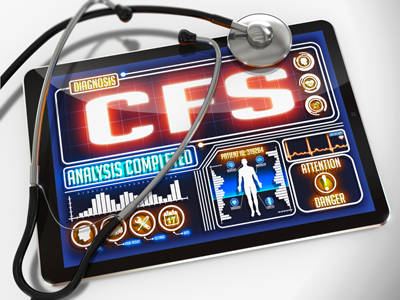 What Is The Link Between Mold and Chronic Fatigue Syndrome?

“Many people are aware that water damage in buildings leads to a variety of bad outcomes. Water-impacted building materials and contents provide an environment where a variety of organisms can flourish. Bacteria, fungus, and even viruses can not only survive but reproduce on damp or wet materials. Obviously, being exposed to such organisms can potentially contribute to health problems for the occupants. Numerous national and international agencies (including the National Institute for Occupational Safety and Health, the Centers for Disease Control and Prevention, the World Health Organization, Britain’s National Health Service, and many others) have put out information warning of the possible ill health effects from occupying damp and moldy environments.” (Michael Pinto, The Mystery of Mycotoxins in Mold Contamination)

“I was a patient of Dr. Cheney’s before the “Yuppie Flu” went through and dropped a bunch of us in our tracks. Guess what my complaint was? “Chronic Fatigue.” I told Dr. Cheney, “I have an inexorably increasing reactivity to mold that gets progressively worse no matter where I live or how well I take care of myself.” This is what brought me to Dr. Cheney’s office in Carnelian Bay in early 1984. So I was reactive to mold prior to CFS. Afterwards my reactivity was absolutely life threatening. Prior to the weird flu, my problems would have been adequately described as inexplicable fatigue….eventually the sensation turned into life-destroying godawful drop-dead neurological living death illness that was nothing like fatigue. My susceptibility to mold was prior, not later as is automatically assumed. I thought that it was more than coincidental that this same mold that has such an effect on me showed up so often in clusters of CFS – especially the one that started it all, at my old high school. Interesting how Dr. Shoemakerʼs “24%” HLA genotype is suggestive of the “25% ME group.” (Erik Johnson, The Role of Toxic Mold in Chronic Fatigue Syndrome)

One of the core goals of Mold B Gone is to create awareness of mold and the potential health impact it can have.

To date, we have written several articles on the connection between mold and illness.

Listed below are some of our most popular articles:

The purpose of this article is to explore the topic of mold and health further by examining the link between mold and Chronic Fatigue Syndrome! 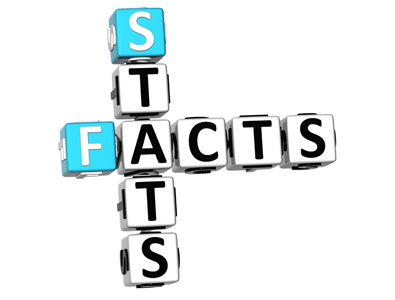 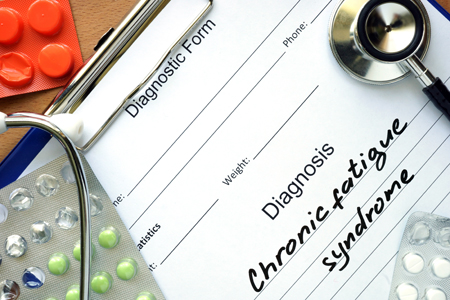 According to the CDC website, there are 12 symptoms associated with ME/CFS.

Could Mold Be The Cause of ME/CFS? 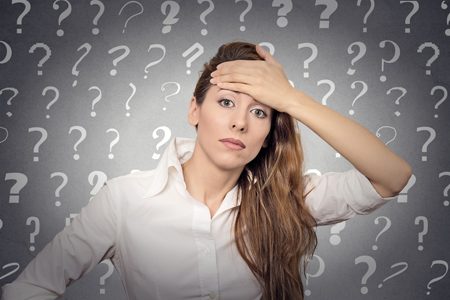 Could Mold Be The Cause of CFS?

To date, no cause has been identified for ME/CFS. In addition, many patients suggest that the treatments recommended for the disease are not helpful or even can make them worse. At best, research suggests that they are only mildly helpful and clearly not a long-term solution for those suffering from ME/CFS.

Upon review of the symptoms, it is apparent that there are many similarities with the symptoms of Chronic Inflammatory Response Syndrome (CIRS).

As discussed in a previous article, 25% of the population have a genetic susceptibility to CIRS which is characterized by 37 symptoms: fatigue and weakness; aches, pains, and muscle cramps; respiratory issues (cough, trouble breathing, and sinus problems); headaches; numbness and tingling; focus/concentration issues, confusion, and mood swings; sleeping troubles caused by night sweats; visual problems, including sensitivity to light and blurring vision; diarrhea and other gastrointestinal problems; and allergic reactions.

Could this possibly mean that individuals diagnosed with ME/CFS are actually suffering from CIRS because they have a genetic predisposition to mold illness?

If this is the case, then one of the key causes of ME/CFS could be mold.

Detection of Mycotoxins in Patients with Chronic Fatigue Syndrome 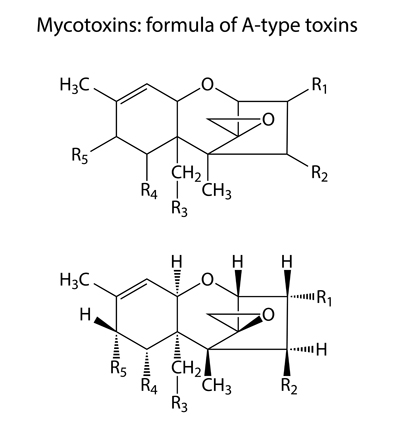 Detection of Mycotoxins in Patients with Chronic Fatigue Syndrome

In 2009, the World Health Organization (WHO) published, WHO Guidelines for Indoor Air Quality: Dampness and Mould, to highlight the potential health problems caused by Water Damaged Buildings (WDB). The WHO concluded:

“When sufficient moisture is available, hundreds of species of bacteria and fungi – particularly mould – pollute indoor air. The most important effects of exposure to these pollutants are the increased prevalence of respiratory symptoms, allergies, and asthma, as well as disturbance of the immune system. Preventing (or minimizing) persistent dampness and microbial growth on interior surfaces and building structures is the most important means of avoiding harmful effects on health.”

In layman’s terms, in this 228 page document, the WHO clearly argues that WDB pose a health threat to occupants.

According to Kristine Allcroft, Ph.D, the 9 most common causes of mold growth in WDB’s are the following:

One of the key problems for individuals working or living in a WDB is that they will be exposed to mycotoxins. Mycotoxins, also known as secondary metabolites are chemical compounds that are produced by fungi during their growth cycle. The suffix toxin is used because a great number of these mold-produced chemicals have been proven to be poisonous to both insects and animals—including people.

In 2013, researchers, Joseph H. Brewer, Jack D. Thrasher, David C. Straus, Roberta A. Madison, and Dennis Hooper explored the connection between mycotoxins and CFS, to determine if mold could possibly be the cause. Their study concluded:

Over the past 20 years, exposure to mycotoxin producing mold has been recognized as a significant health risk. Scientific literature has demonstrated mycotoxins as possible causes of human disease in water-damaged buildings (WDB). This study was conducted to determine if selected mycotoxins could be identified in human urine from patients suffering from chronic fatigue syndrome (CFS). Patients with a prior diagnosis of CFS were evaluated for mold exposure and the presence of mycotoxins in their urine. Urine was tested for aflatoxins (AT), ochratoxin A (OTA) and macrocyclic trichothecenes (MT) using Enzyme Linked Immunosorbent Assays (ELISA). Urine specimens from 104 of 112 patients (93%) were positive for at least one mycotoxin (one in the equivocal range). Almost 30% of the cases had more than one mycotoxin present. OTA was the most prevalent mycotoxin detected (83%) with MT as the next most common (44%). Exposure histories indicated current and/or past exposure to WDB in over 90% of cases.

Key conclusions from the study:

Concluding Thoughts On The Link Between Chronic Fatigue Syndrome and Mold 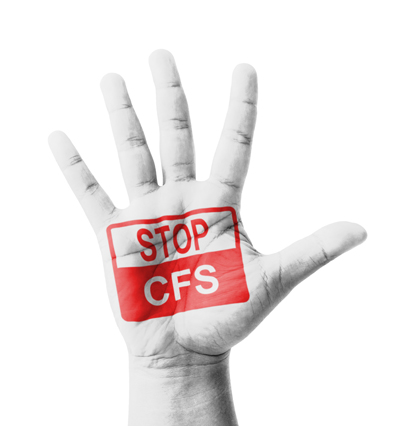 Concluding Thoughts On The Link Between Chronic Fatigue Syndrome and Mold

Since the modes of activity of trichothecenes differ from aflatoxins and other mycotoxins, the combinations of mycotoxins could be additive or even synergistic, which could significantly reduce the amount of either mycotoxin required to induce an immunosuppressive or toxic effect. Immunosuppressive and combinational effects of multiple mycotoxins may constitute major components in the adverse health effects reported by many of the victims of mold exposure. (A risk assessment model for mycotoxin-producing molds on human health in indoor environments)

If you have been diagnosed with ME/CFS, one of the first proactive actions you can take is to find out if you have mycotoxins in your body. If you do, then your current exposure to mold in a WDB or previous history of living in a WDB could be the cause.

If you are unsure of whether or not your home is water damaged and has mold, contact Mold B Gone and we can determine if you have mold and the cause of your mold growth.

If you do have mold and you test positive for mycotoxins in your body, there are two key actions you must take.

First, you should consult with an environmental physician that knows how to treat individuals sick from mold and mycotoxin exposure. If you live in the Atlanta metropolitan area, call us, 678-697-6267, because we can refer you to a physician that treats mold sensitized patients.

Second, if you are currently living in a WDB property, the source of the mycotoxin exposure has to be removed. This is very important because professional mold remediation is essential to preventing the symptoms of mold sickness and Chronic Fatigue Syndrome from coming back when your medical treatment has been completed.

If you have recently been diagnosed with ME/CFS and suspect that mold may be the cause, please call us, 678-697-6267 or send us an e-mail. We have mold sensitized training and empathize with your situation. Mold B Gone has removed mold from 1000s of homes and we specialize in serving the needs of mold sensitized individuals.

In addition to the resources listed below, I would like to thank Lisa Petrison, Ph.D, for her suggestions and comments!